Mangosteen is SUPER Rich in Antioxidants 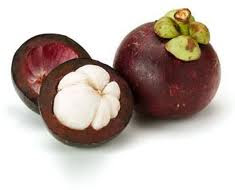 'Mangosteen is sometimes known as "The Queen of Fruits" in some parts of Southeast Asia, notably Singapore and Malaysia. It is believed to have "cooling" properties that counteract the "heat" of durians, the so-called "King of Fruits".'

Watch the Video for Mangosteen Information


The Mangosteen is a wonderful, juicy and divine fruit to eat - the kind of 'nectarous' food that would be relished by ancient Greek God Foodies at decadent banquets on Olympus!  There is simply no equivalent rival when it comes to taste, texture and its rich appearance when you break open the fruit.

The Mangosteen grows in South-East Asia where the climate is hot all year round and has a semi-hard, thick, deep purple shell which you break by crushing the whole fruit between the palms of both hands.  You can only taste the Mangosteen when it is in 'season' because the tree does not bear fruit all year round nor can you buy them easily if you are not from the region. The fruit below is not quite ripe yet. When it ripens the Mangosteen turns from green to red to a deep, luscious, purple colour as shown in the first and last photos! 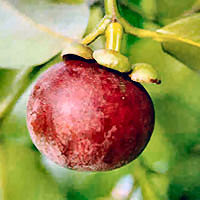 Inside the shell you will find 5 or 6 white, fleshy, succulent segments, each of which is snugly cradled in a crimson, spongy fitted-mould!  Each of these juicy segments contain one central stone or pit which you 'spit out' if you are eating Mangosteens fresh - which is how it is eaten locally. At least that is the way you eat them in the tropics! 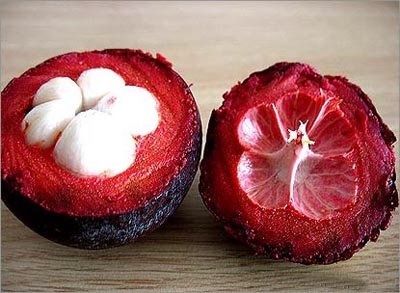 The Mangosteen is considered a 'Superfruit' as it contains a potent concentration of Xanthones, one of the most powerful anti-oxidants ever discovered, which gives it that deep, purple colour. The best way to avail yourself of the health benefits of Mangosteen is by taking supplements as you rarely see this fruit outside of the region and even within S. E. Asia the fruit is seasonal as the tree only bears fruit once or twice a year! And when it does it is quickly consumed as it is popular with the locals who value the fruit for its health benefits as much as its divine taste!

"One of the planet’s most powerful superfruits is the Mangosteen fruit. By consuming Mangosteen in an easy-to-take, capsule format daily, you may benefit from the following health improvements." 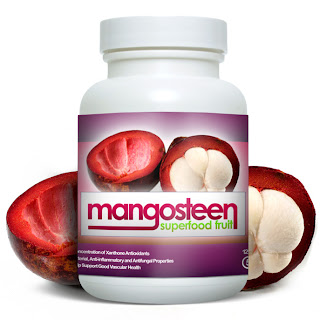